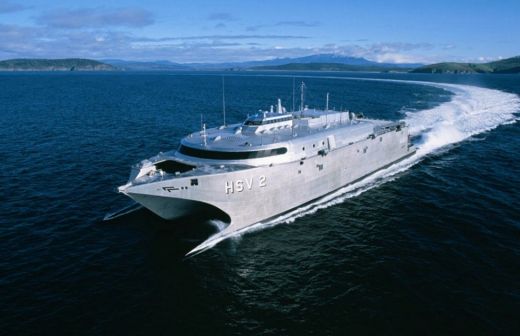 A study into improving ship design and structural efficiency has been recognised as the best internationally by a researcher under the age of 35.

The study was carried out in collaboration with Tasmanian high-speed ferry company INCAT and aims to develop a better understanding of the loads experienced by high-speed vessels in a range of sea conditions.

Mr Almallah said this knowledge was particularly vital during the design phase.

“Wave-piercing catamaran hull forms are widely used for high-speed ferry applications due to the hull slenderness, suitable for achieving high speeds,” he said.

“The global loads acting on these craft are of great interest as there is limited knowledge on determining the magnitude of the loads, in particular when operating in random sea conditions.”

“Our broad aim was to demonstrate the use of strain sensor data obtained during sea trials for determination of global sea loads, to reconcile the loads thus determined with DNV load cases and thereby to improve the accuracy of the predicted loads used in design to increase the structural efficiency of vessel design,” Mr Almallah said.

The paper was published in the RINA 2019 Transactions, International Journal of Maritime Engineering and co-authored by Dr Jason Lavroff, Dr Damien Holloway and Professor Mike Davis.