Researchers shed light on the growth of ‘baby’ giant stars 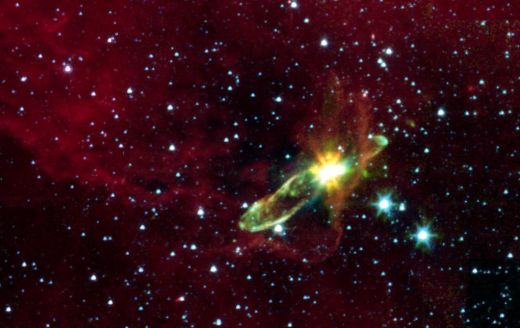 The formation of high-mass stars, giants compared to our Sun, has long been a mystery of astronomy.

One theory proposed that these protostars (also known as new-born stars) gather mass through ‘episodic accretion’, which involves brief bursts of growth, or ‘accretion bursts’, followed by long periods of inactivity lasting from hundreds to thousands of years.

Recently a team of astronomers, including researchers from the University of Tasmania, managed to identify and observe an accretion burst in real time from its onset, a rare opportunity that helped prove the episodic accretion theory of stellar formation.

The team focused on a high-mass star-forming region which hosts G358-MM1, a protostar located 22,000 light-years from Earth.

Co-author Professor Simon Ellingsen, from the University’s School of Natural Sciences, explains: “From our observations, we’re able to map gas close to the protostar in three dimensions, and it looks like the material flowing onto the star has formed a spiral structure.”

The spiral pattern also provides an explanation as to why the accretion happens in bursts, rather than more steadily.

“These protostars are in many ways the most important for the evolution of galaxies over cosmic time, but at the moment, we don’t have a good understanding of how they form,” Professor Ellingsen said.

“Observing the formation of these giants is hard – there aren’t very many of them, they form quickly, and the formation is hidden deep within very dense gas clouds which blocks light at most wavelengths.

“Our new observations are providing some of the most direct information as to how these stars accumulate their mass and are opening up an exciting new window to study these rare events.”

Image: protostars such as Herbig-Haro 46/47 are giants compared to our Sun but difficult to observe. Credit: NASA-JPL.