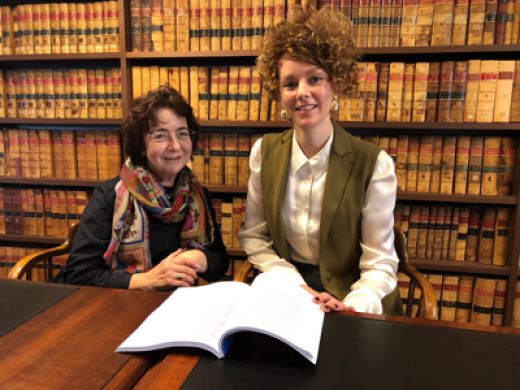 Jurors’ use of social media and other internet activity during criminal trials is the focus of research underway at the Tasmania Law Reform Institute (TLRI).

There has been limited research in this area in Australia and overseas, and the prevalence of juror misconduct of this kind remains largely unknown.

The TLRI released an Issues Paper on this subject today. The author, Research Fellow Jemma Holt, said indications are that juror misconduct of this kind is under-reported, at least to some extent, and that the reported cases represent the bare minimum of this misconduct.

“The detection of juror misconduct of this kind may be rare, but this does not necessarily mean that such misconduct is, in fact, rare,” she said.

Ms Holt said the research is a starting point in understanding the use of social media and other online activity during jury trials. Juror misconduct via social media and the internet may be either intentional or unintentional, or, indeed, somewhere in between.

The research is considering a wide range of juror conduct, from jurors searching for information specific to the trial they are considering right through to the fact that they could accidentally come across relevant information in their normal social media and online activity. It is also considering jurors publishing material online which may disclose bias or prejudice on their part, or otherwise elicit impermissible information by way of a response.

Ms Holt said: “Preserving an accused person’s right to a fair trial at a time when social media and other internet platforms are omnipresent in our everyday lives is a significant concern.

“The majority of Australians are continuously online and engaged; at home, at work and in-between on our smartphones. If individuals continue this behaviour when they are jurors sitting in a criminal trial, they risk adversely affecting the accused’s right to a fair trial.

“An accused is entitled to a trial before an impartial jury that makes its determination in accordance with evidence that has been properly admitted and tested during the trial,” Ms Holt said.

“Commentators have coined many terms which refer to the phenomena of jurors inappropriately using social media and/or internet platforms during a criminal trial and the consequences for the accused’s right to a fair trial: Googling jurors; internet-surfing jurors; trial by Google; Google mistrials; E-jurors; do-it-yourself or DIY jurors; the twitter effect; internet-tainted jurors; digital injustice; wired jurors; and rogue jurors. However, there is no single expression that encapsulates the full range of possible juror misconduct of this kind.”

There have been documented cases in Australia and elsewhere of:

· Jurors publishing material about the trial on the internet or social media, which may elicit impermissible information by way of a response.

However, juror misconduct of this kind is not a phenomenon that is peculiar to larger jurisdictions and high-profile criminal trials.

In 2015, following a Supreme Court trial in Launceston (which resulted in the conviction of two defendants of aggravated assault and wounding), court staff who were cleaning the jury room discovered three pages of computer-printed material. The material contained the results of searches on the meaning of “beyond reasonable doubt” and “circumstantial evidence” from a US online legal dictionary.

“This case may very well represent the tip of the iceberg when it comes to juror misconduct of this kind in Tasmania,” Ms Holt said.

The TLRI Issues Paper seeks to:

The Issues Paper, including an easy-read version, can be found here: http://www.utas.edu.au/law-reform/publications/ongoing-law-reform-projects2.  To assist feedback, a submission template is also available for download.

The institute invites submissions on this topic until 4 October 2019.

All submissions will inform the institute’s Final Report, which will ultimately consider whether reform of the current laws and practices is justified and, if so, what form that should take. The institute will deliver a Final Report to the Attorney-General in early 2020.