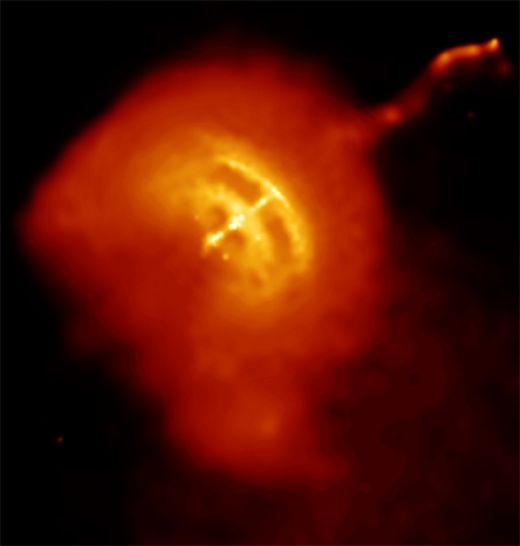 It’s the glitch in the system 1,000 light years from Earth that has the astronomers across the world in a spin.

And now new research involving the University of Tasmania’s Dr Jim Palfreyman and the Mt Pleasant Radio Observatory reveals the Vela Pulsar - a collapsed star rotating at 11 times per second – undergoes a ‘precursor slowdown’ before a documented high-speed glitch which takes place once every three years.

In 2016, Dr Palfreyman was the first astronomer in the world to capture the neutron star’s glitch ‘live’ with a radio telescope large enough to see individual pulses, and now new research published today in the journal Nature Astronomy shed further light on the nature of these super-dense and mysterious objects.

“If we can detect flashes from a neutron star, it’s called a pulsar.”

Three years ago, Dr Palfreyman – using the Mt Pleasant telescope to collect data for 19 hours a day – finally captured the Vela Pulsar skipping a beat, a brief period when its rotation momentarily speeds up.

But the new study published by Nature Astronomy and involving Monash University, the ARC Centre of Excellence for Gravitational Wave Discovery and McGill University in Canada, reveals the pulsar also undergoes a slowdown as part of the glitch.

“The glitch itself is quick, less than 12 seconds,” Dr Palfreyman said.

“But just before it glitches, it actually dips in speed, then overshoots, then decelerates to a faster than normal speed.”

The glitch is so brief that it only occurs about one-millionth of the time.

The Vela Pulsar has become a favourite of ‘glitch hunters’ because only seven per cent of pulsars are known to glitch, but also because Vela’s occur so regularly.

Dr Palfreyman said the best hypothesis about what causes the Vela Pulsar’s glitch related to a slowdown in the neutron star’s outer crust, but which was not accompanied by a similar slowdown in its superfluid core.

“This slowdown is important because it is one of our first glimpses into the internal nature of neutron stars.”

Dr Palfreyman said that with the Vela Pulsar being 1,000 light years away, it was amazing to think that there were around 330 glitches that had already occurred and were still on their way to Earth.