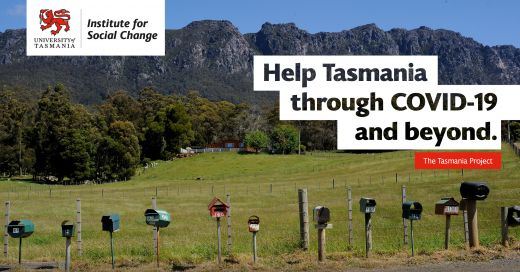 The internet is proving beneficial for Tasmanians’ wellbeing during COVID-19, but risks of digital exclusion remain a concern, a University of Tasmania study has found.

Interpersonal communication and easy access to written information for news or entertainment were the most common uses of the internet for wellbeing, The Tasmania Project’s second general survey found.

The survey, led by the University of Tasmania’s Institute for Social Change, asked participants to rate the importance of 13 common internet-based activities for maintaining wellbeing during Tasmania’s lockdown.

Video conferencing, specialised work and study platforms, and connecting with family and friends through private social media (such as a WhatsApp group) were rated as more important than average.

Social media (such as Instagram and Facebook) and online publishing, while used by around 70 per cent of participants, were rated as having below-average importance for maintaining wellbeing.

“Our findings suggest that, without the internet, lockdown would have been much harder for Tasmanians to manage,” Institute for Social Change Adjunct Professor Matthew Allen said.

“However, while many Tasmanians reported good connectivity skills and confidence in using the internet, there were several indicators of disadvantage.”

Forty per cent of participants reported their internet access was slower and less reliable because more people were using it at home, showing pressure on connectivity during lockdown.

The survey results also highlight a link between unemployment and risks of digital exclusion, even though internet use is critical for gaining skills and finding work.

Unemployed participants reported more concerns about their connectivity than any other single sub-group. Their greater dependence on mobile access meant they were more likely to limit their use of the internet because of concerns about cost.

Tasmanians over 65 years old are also at risk, reporting less skill in using the internet than younger participants and reduced in-person help during lockdown.

“Results show that, due to the lockdown, people are valuing friends and family more, and see the internet as critical for work and study,” Professor Allen said.

“Nowadays, the internet is clearly an essential resource for Tasmanians, and that heightens the dangers of digital exclusion.”