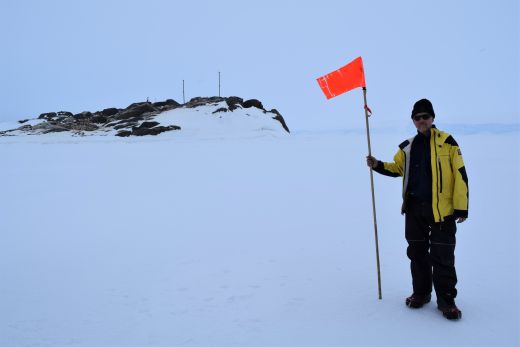 Bedrock buried under kilometres of ice in a remote part of Antarctica has revealed some of its secrets for the first time in a new study by scientists from IMAS and Macquarie University.

Wilkes Land in East Antarctica remains one of the last geological exploration frontiers on Earth, although bedrock in this region is important as it underlies some of East Antarctica’s most vulnerable ice sheets.

Known to correlate with the geology of southern Australia, which Antarctica was once connected to as part of Gondwana, the region’s geology has been masked by ice for millions of years, while the equivalent rocks in Australia are buried under the Nullarbor Desert in one of the least understood geological regions on the Australian mainland.

“For years Wilkes Land has been a blank spot on geological maps,” Mr Maritati said.

“It was only recently that airborne geophysical surveys have allowed us to speculate about geology under the ice.

“We wanted to ground-truth some of the new hypotheses so we gathered new geological data from remote rock outcrops along the coast and glacial erratics transported by the ice from interior regions and matched this with the new geological data that have recently come out from a drilling campaign in the equivalent region in southern Australia.

“When piecing all the geological evidence together, we were able to identify in interior Wilkes Land the presence of a basement of granitic rocks formed over a billion years ago.

“We also provide the first geological insights into the vast Sabrina Sedimentary Basins that blankets this granitic basement.

“It was previously suggested that this basin formed during the separation of Antarctica from Australia and could be similar to the sedimentary rocks we see today on the cliffs of the Great Australian Bight.

“We have however found evidence for a much older sedimentary basin which relates to the breakup of an even earlier supercontinent.

“The rocks that could be expected under the ice may be similar to some of the sedimentary rocks that crop out in the central Australian desert.

“Our improved correlation between Wilkes Land and southern Australia will be fundamental in better understanding the relationship between the two land masses and informing plate tectonic models of lost supercontinents in deep Earth history,” he said.