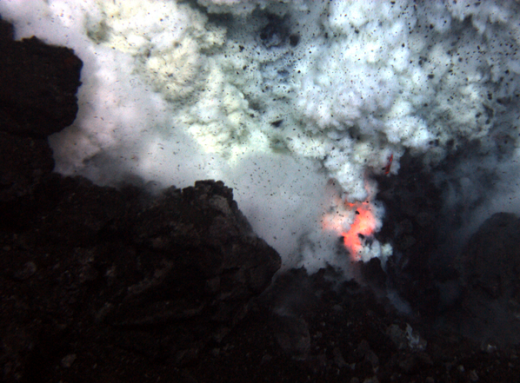 A team of international researchers have used laboratory experiments to understand how hot magma and water interacts explosively underwater.

“There are conceptual theories about how deep volcanic eruptions should be relatively passive, and form lava flows due to the huge amount of pressure from the overlying water column,” co-author and University of Tasmania volcanologist Dr Rebecca Carey said.

The experiments, published overnight in Nature Geoscience, have demonstrated that the explosive interaction of hot magma and cold water can occur in a range of wet environments regardless of the pressure.

“This study is valuable because it expands the depth window for which deep explosive submarine eruptions are possible,” Dr Carey said.

The ash fragments from these experiments were compared to natural ash samples from the largest-known kilometre-deep submarine eruption, in 2012 at Havre Volcano, New Zealand.

“The ash particles produced during these experiments were statistically similar to some of the eruption products we sampled on the seafloor in 2012 with the remotely operated vehicle, suggesting that explosive events did occur during this eruption at a water depth of 1km.”

Dr Carey led the international team that responded to the Havre eruption, visiting the site with underwater robotic vehicles in 2015.

The study of submarine volcanism is in its infancy due to the inaccessibility of the seafloor without robots.

“The conclusions of this study represent a fundamental advance on our understanding of how the planet works, and it is fantastic to see such advances continuing from a significant US, NZ and Australian investment in research over the last decade.

“With 80 per cent of the Earth’s volcanoes located on the seafloor, the study of submarine volcanism is very important – volcanism is a key source of heat and chemicals to the ocean and also supports life.”

Dr Carey is the recipient of the Australian Academy of Science’s 2020 Dorothy Hill Medal, in recognition of her exceptional contributions to the worldwide earth sciences community.

Image: An explosion near the summit of the West Mata submarine volcano, south-west of the Samoas. Credit NOAA/National Science Foundation.