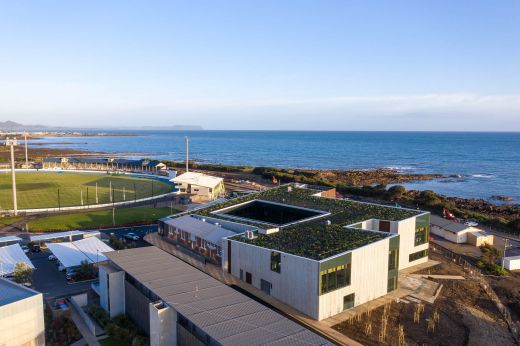 More than 10,000 plants have been putting down roots high above the University of Tasmania’s new Cradle Coast campus.

The sustainable green roof is a unique design feature of the development, inspired by the surrounding coastal environment at Burnie’s West Park.

The roof echoes the ecological significance of the site and wider region by integrating species of local provenance that are tolerant of the site’s conditions.

It’s expected to attract birds, insects, invertebrates, and even small reptiles that will contribute to the rich biodiversity of the site.

The emerging ecosystem will be the topic of community conversation during the University’s next Café Lab series happening on Tuesday, 7 September.

Fytogreen was the specialist green infrastructure company that implemented the roof, commencing installation after leak detection testing of the base waterproof membrane had been completed.

Components were craned onto the roof, with protective and drainage layers first fitted, before a whopping 350m3 of specially engineered soil media was spread, followed by drip irrigation infrastructure, stone mulch and finally planting.

Geoff Heard, Fytogreen Managing Director said the green roof at West Park was likely the biggest of its kind in Northern Tasmania.

“There are a number of benefits of having a green roof. Aesthetic is one, and bringing flora and fauna back into a built-up space is another,” Mr Heard said.

“We’ll probably find a lot of bird habitat taking to the space and that’s the exciting part – the roof will continue to evolve. I don’t think we’d be surprised to find mutton birds burrowing in up there.

“There are 26 species which make up the 10,107 plants. All are native to the Cradle Coast region and can be found within a 40-kilometre radius of the West Park site.

“These include groundcovers, sedges, lilies, shrubs and climbers which are all tolerant to the coastal conditions - particularly wind and salt.”

The plants have been positioned on the roof in accordance to areas of exposure with some of a hardier nature offering protection to those less tolerant.

“Over time, the plants will self-organise in response to the elements experienced on site,” Mr Heard said.

The infrastructure will catch and recycle 30% from every irrigation event, helping reduce stormwater run-off into the sea and minimising overall water use.

Another sustainable benefit is the thermal insulation properties that will keep the building cool in the warmer months - helping reduce energy consumption. The roof will also provide an acoustic buffer.

Local labour was used for the installation and planting phase of the project in January, and local supplies were sourced wherever possible including most of the plants, mulch and a specialist, lightweight soil media – Hydrocell 40 from Barwicks, helping keep the circular economy going.

University of Tasmania Pro Vice-Chancellor Professor Jim Cavaye said it had been exciting to watch the roof come to life.

“The green roof is a really innovative solution to having an environmentally sustainable building, but it also allows the campus to blend into the surrounding landscape,” Professor Cavaye said.

“This was something the University wanted to do and thought was important. We needed to have a building that was of the highest environmental sustainability but which also complemented West Park and the wider region.

“It is something that represents Tasmania and the North-West.”

The implementation of the green roof was overseen by Fytogreen, with landscape architects ASPECT Studios also contributing to the design under the guidance of John Wardle Architects.

The new Cradle Coast campus will open at West Park on 6 September, with the community invited to tour the site during Open Day on Saturday, 11 September.