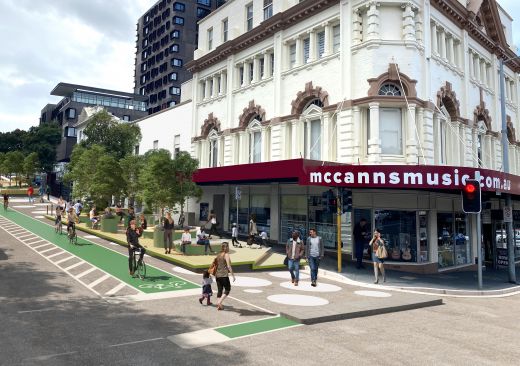 A trial parklet could be introduced outside the University of Tasmania's new student accommodation on Melville St in the Hobart CBD.

The University has lodged a Development Application with the City of Hobart to trial a temporary parklet - including new street furniture and planters with power connections and lighting - to make the area more user-friendly and encourage people to spend more time in the city.

A survey of city users conducted to inform the University's future campus masterplan found people wanted to see more greenery, activation and street furniture in the city streets around the campus.

The University has consulted with the Royal Tasmanian Botanical Gardens and the City of Hobart's arboriculture team on the proposed plantings for the parklet, as part of the future green spine of the new CBD campus, running along Melville St to the Domain.

The draft masterplan for the future city campus, released in May, is available online at www.utas.edu.au/southern-future. It provides the guiding principles and the five key precincts of the future campus, ahead of detailed plans which are under development for each site and building.

Masterplanning is also underway to guide the future of the Sandy Bay site. More information on that process is available at www.reimaginesandybay.com.au