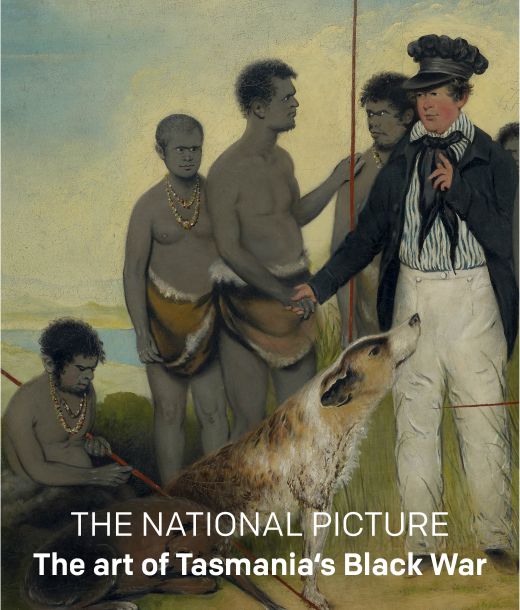 A book of art that shines light on a dark period in Tasmania's history, the Black War, has won the State's most significant literary award.

The National Picture: The Art of Tasmania's Black War (The National Gallery of Australia) is the winner of the $25,000 Dick and Joan Green Family Award for Tasmanian History.

The book was published to accompany an exhibition of the same name presented by the National Gallery of Australia (NGA) and the Tasmanian Museum and Art Gallery (TMAG).

It examines the depiction in art of the conflict between Tasmanian Aboriginal people and colonists, and two figures in Australian history: artist Benjamin Duterrau and the controversial 'Conciliator' George Augustus Robinson.

Bonyhady is an environmental lawyer and cultural historian at the Australian National University.

Lehman is an art historian, curator and writer, and Pro Vice-Chancellor, Aboriginal Leadership, at the University of Tasmania.

Chair of the judging panel, Executive Dean of the College of Arts, Law and Education at the University of Tasmania, Professor Kate Darian-Smith said The National Picture stood alone as a book of impressive scholarship.

"The National Picture combines extensive historical research with an uncompromising quality of design and reproduction, and polished and engaging writing," Professor Darian-Smith said.

"Bonyhady and Lehman have made a significant contribution to our understanding of Tasmania's past, and more broadly to the history of Australian art and culture."

The judges commended the shortlisted books:

The biennial award recognises works that make a significant contribution to our understanding of Tasmania's past and celebrates books on the island's history and cultural heritage.

It was set up to commemorate and celebrate the contribution Joan Green and her late husband Dick made to Tasmania.

The couple were key players in the National Trust and strong supporters of the arts and many community organisations.

Speaking on behalf of the Green family, Caroline Johnston, one of Dick and Joan's daughters, said:

"It is very exciting to see The National Picture announced as the winner of the 2020 Green Family Award for Tasmanian History and all the family warmly congratulate the authors Tim Bonyhady and Greg Lehman on such an interesting book," Ms Johnston said.

"I would like to thank our three judges and extend our appreciation to each of them for their contributions.

"We were again thrilled at the diversity of books and authors nominated for this our second award and are grateful for this support."

More information is available on the: University of Tasmania and Green Family Award websites.