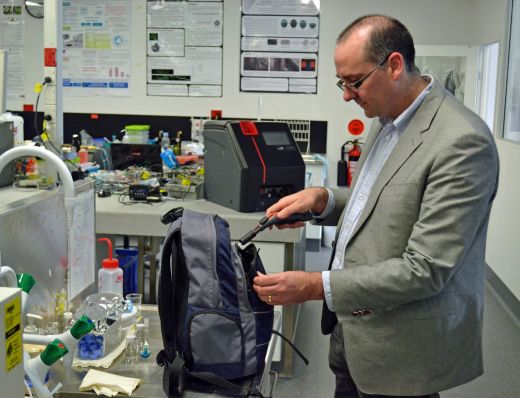 A portable device which rapidly detects homemade explosives, using technology invented at the University of Tasmania, has been recognised with a prestigious Eureka Prize nomination.

The University, together with commercial partner Grey Innovation, has been nominated as a finalist in the Outstanding Science in Safeguarding Australia category.

GreyScan is the world’s first trace-detection device that can identify inorganic explosives in under a minute, and its use in mass transit locations such as airports and train stations could help make Australia and the world safer.

The chemistry was initially developed by the Australian Centre for Research on Separation Science (ACROSS) based at the University of Tasmania.

The technology was invented by a team led by Professor Michael Breadmore and developed in strategic partnership with Grey Innovation, Australian Federal Police, National Institute of Forensic Science, Australian Customs Service and US Homeland Security.

“The instrument can detect homemade bombs of the types used in the Oklahoma bombings, Bali and the Boston marathon bombings,” Professor Breadmore said.

“This is excellent recognition for our team and just goes to show what Australia can achieve when we back ourselves to not only do the critical research to demonstrate the capability, but also to invest in translating the product to bring to market through value-based, long-term strategic relationships with innovation partners such as Grey Innovation.”

Established in 1990, the Australian Museum Eureka Prizes are the country’s most comprehensive national science awards, honouring excellence across the areas of research and innovation, leadership, and science engagement and education.

Winners of the 2019 Eureka Prize awards will be announced at a gala dinner at the Australian Museum in Sydney on Wednesday, 28 August.